Jewels
Part 9 of the Gundabad Series

Zidir-nesad: Each quest becomes available once you complete the full meta deed of a specific region. This includes the quests, chests, and all the slayer deeds. These quests not only allow you to reconstruct the throne at Steepset with each individual Zabad'ibin, but completing all seven of them will reward you with a unique picture frame as well. 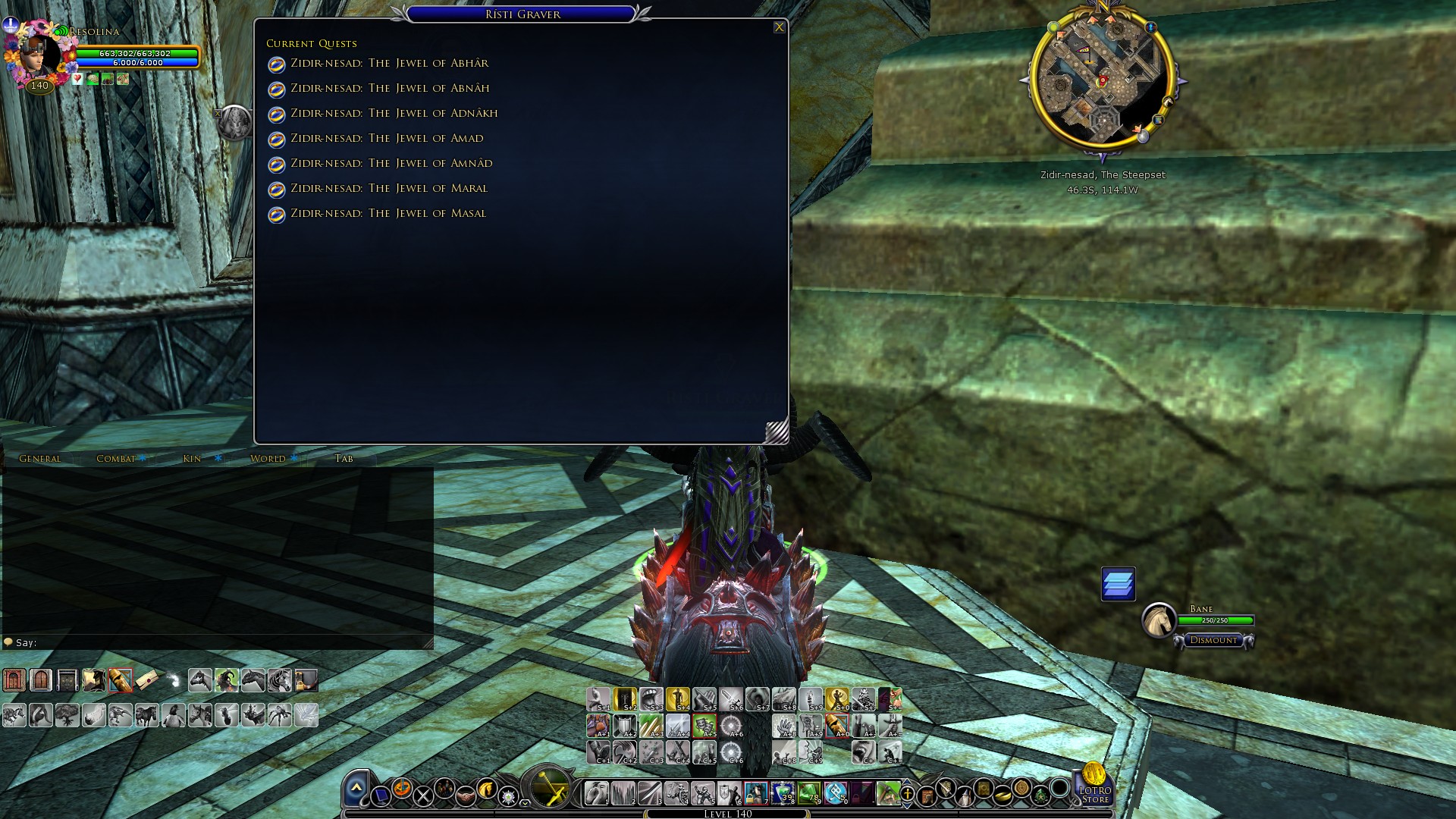 Info: The panicked little dwarf will alert you that they found where the jewel is located... sort of. They know whereabout it is but they don't have anyone available that's smart enough to find it. This is where you come in. On the opposite side of the structure that is highlighted by the quest objective is a small lever. You must turn this lever first in order for the hidden staircase to appear. This will be very difficult to find, but do know that it is right behind a treasure cache as a reference. After a series of jumps and bridges, you'll find the gem at the end.

Lore: This green gem symbolizes the will of the dwarves to achieve whatever they set their minds and muscles to accomplish... let it be a sign to all those who struggle against overwhelming odds, and give them the strength to persevere! 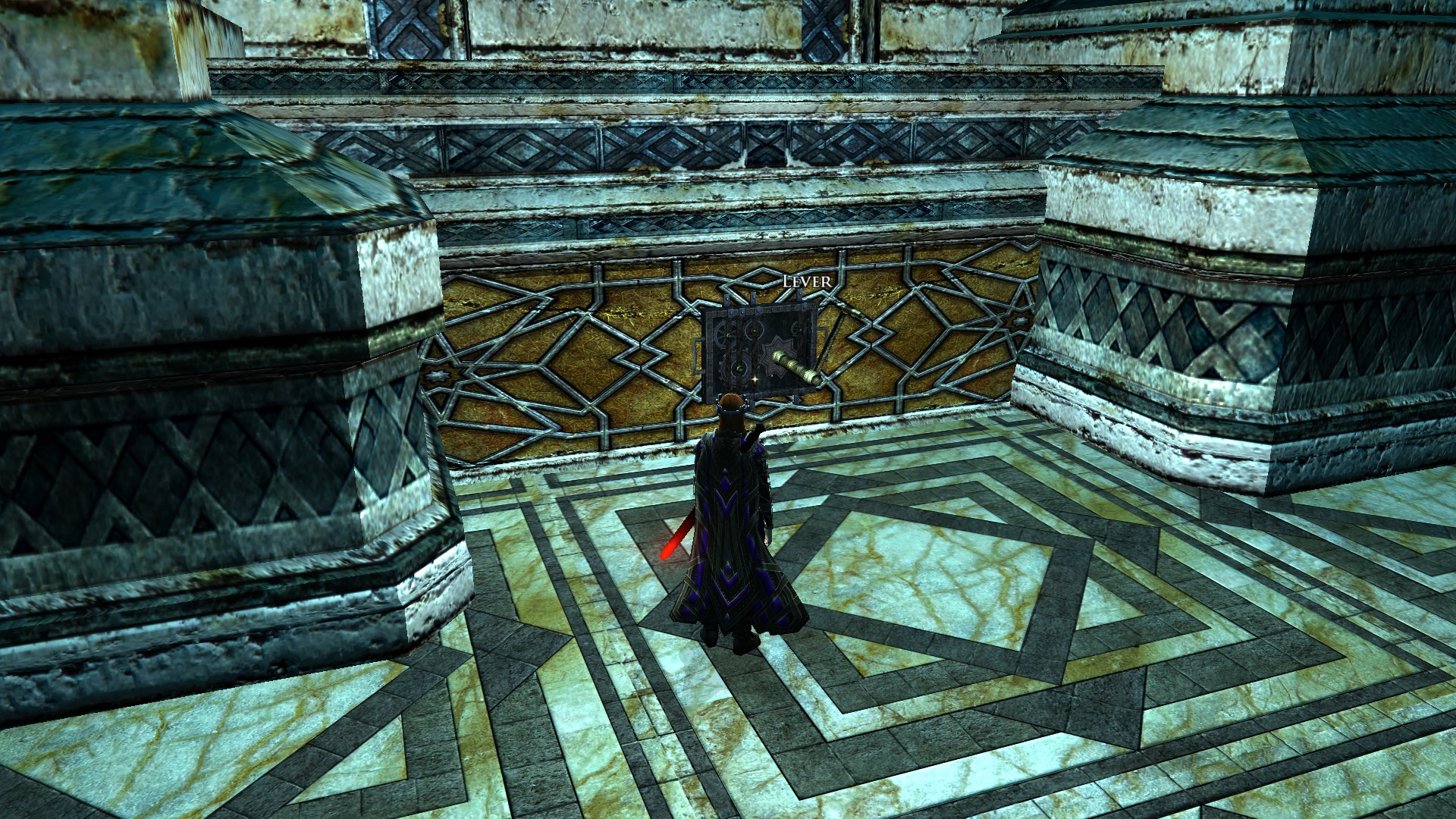 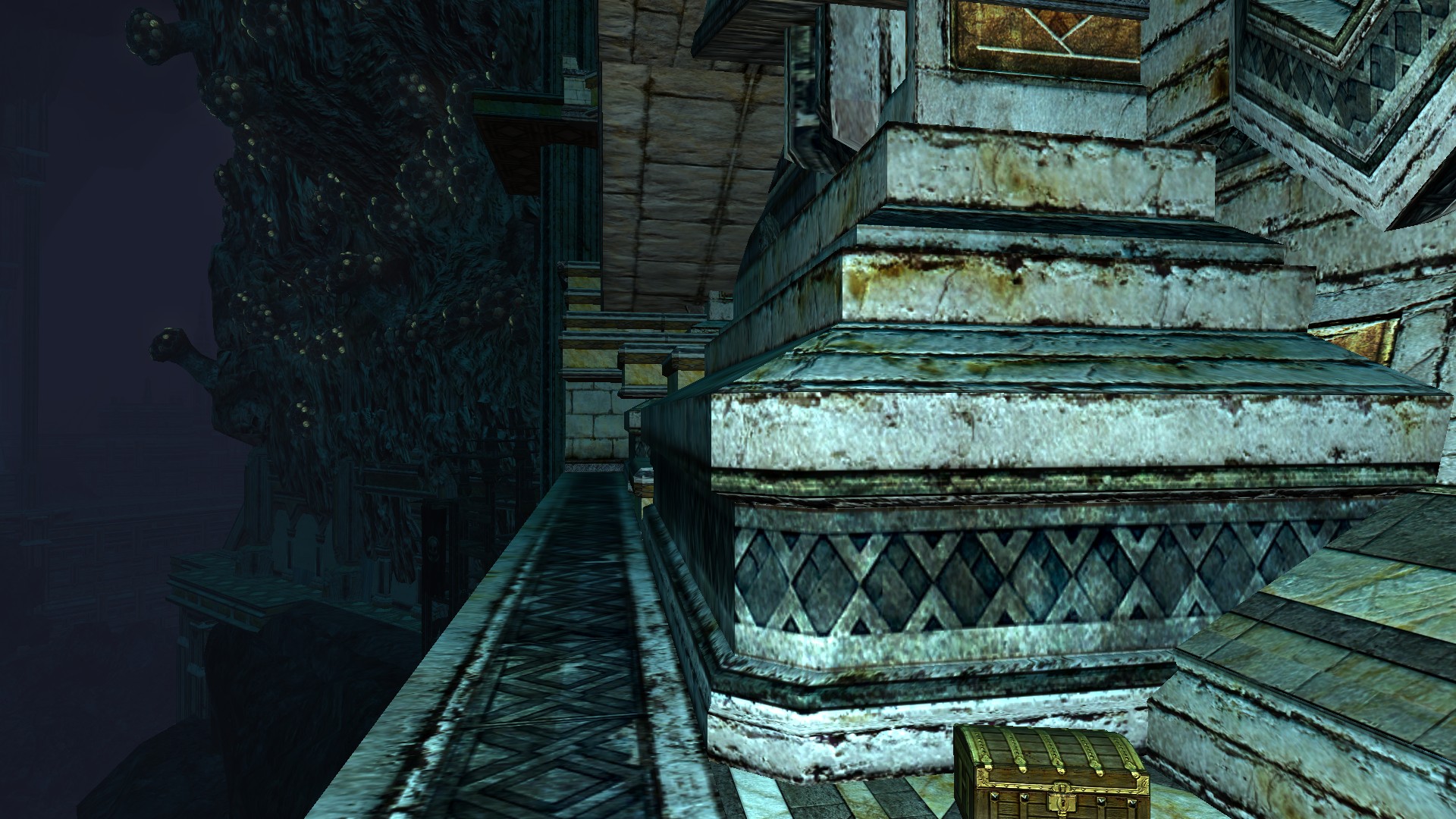 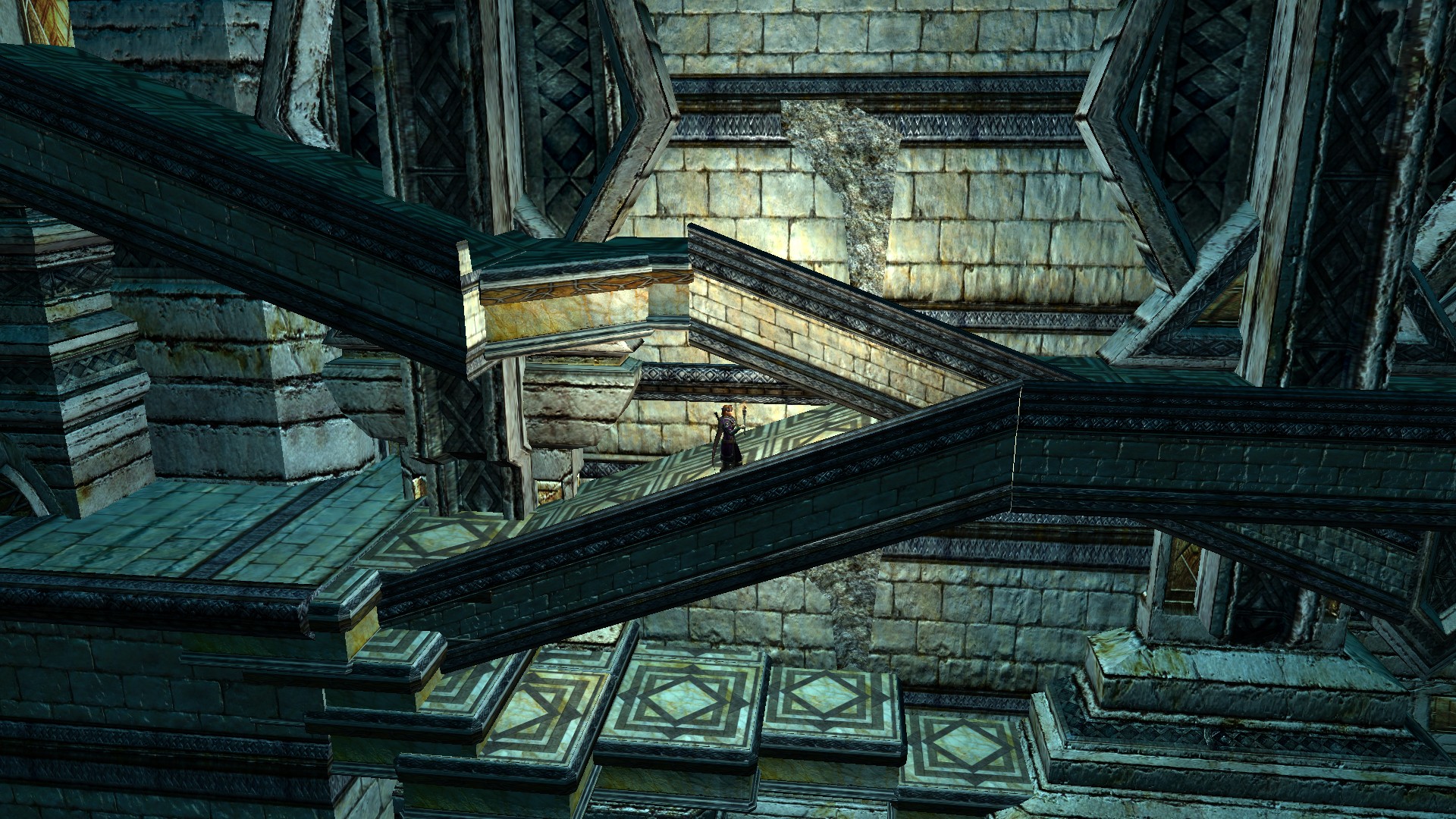 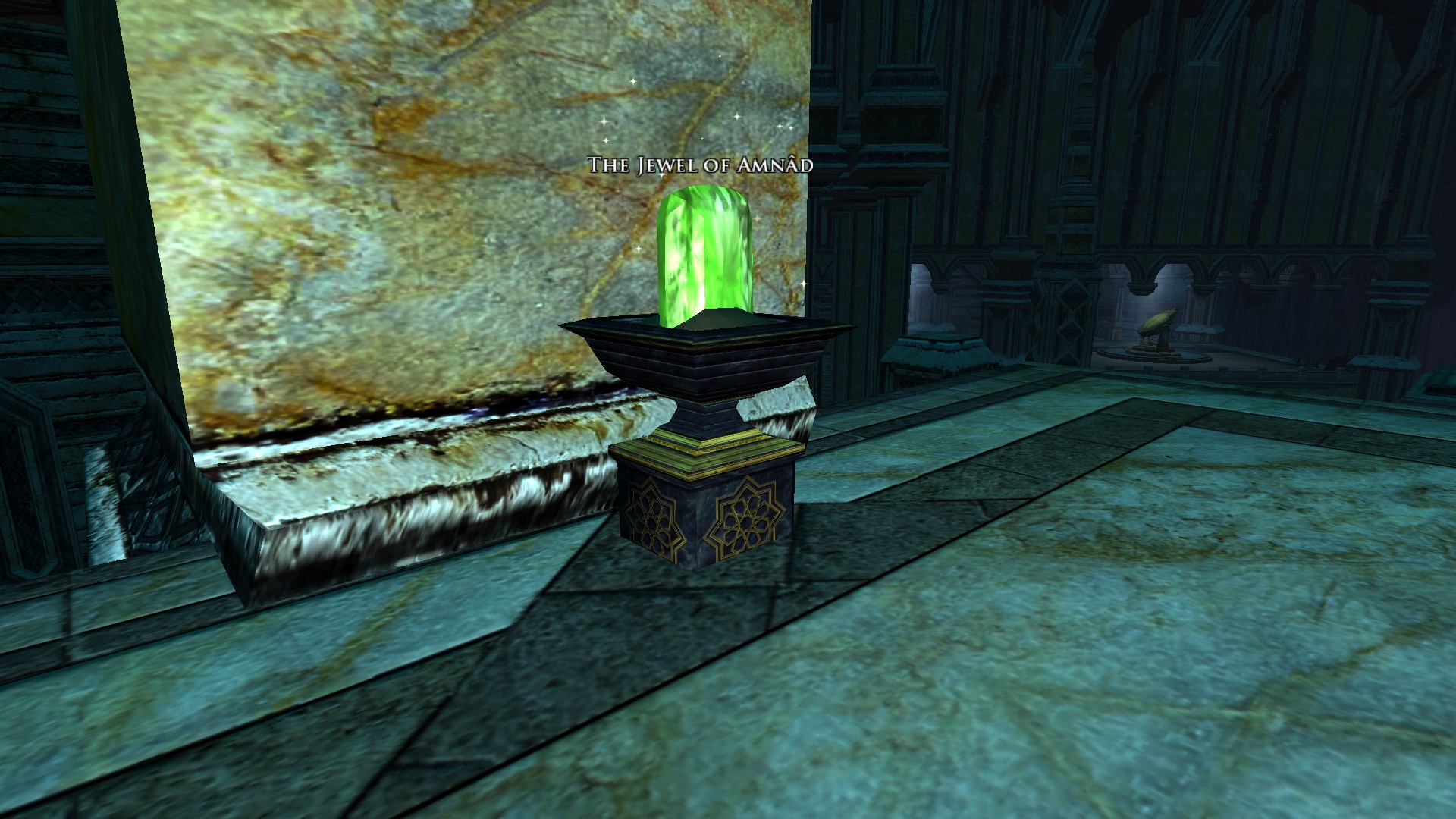 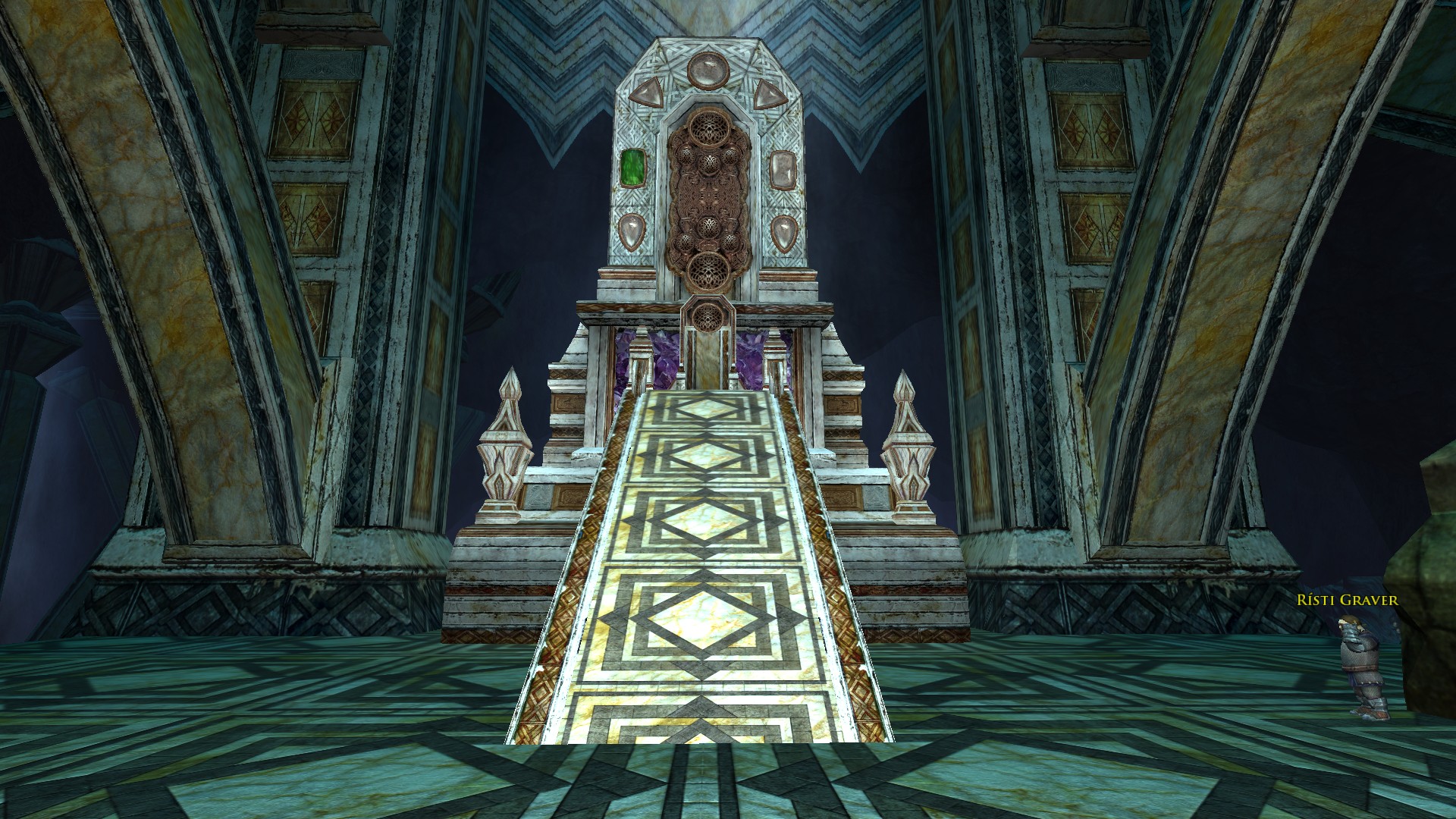 Info: This particular quest will take a lot of work to complete. One of the hardest things is finding a good number of trolls to slay. None of the ones in missions or instances will count towards the deed. Although you could potentially find a good number of them randomly spawning across the ground floor, it is a good idea to set up camp by Vatug-ronk, The Groaning Pit. Once you do obtain the quest, it is as simple as slaying one of the ugliest orcs around over at Durshulot [49.1S, 118.2W]

Lore: This blue gem symbolizes the grand traditions of the dwarves, and reminds us to remember the places from which we came. The return of this jewel will undoubtedly boost the spirits of all who see it, letting them know the rightness of our cause. 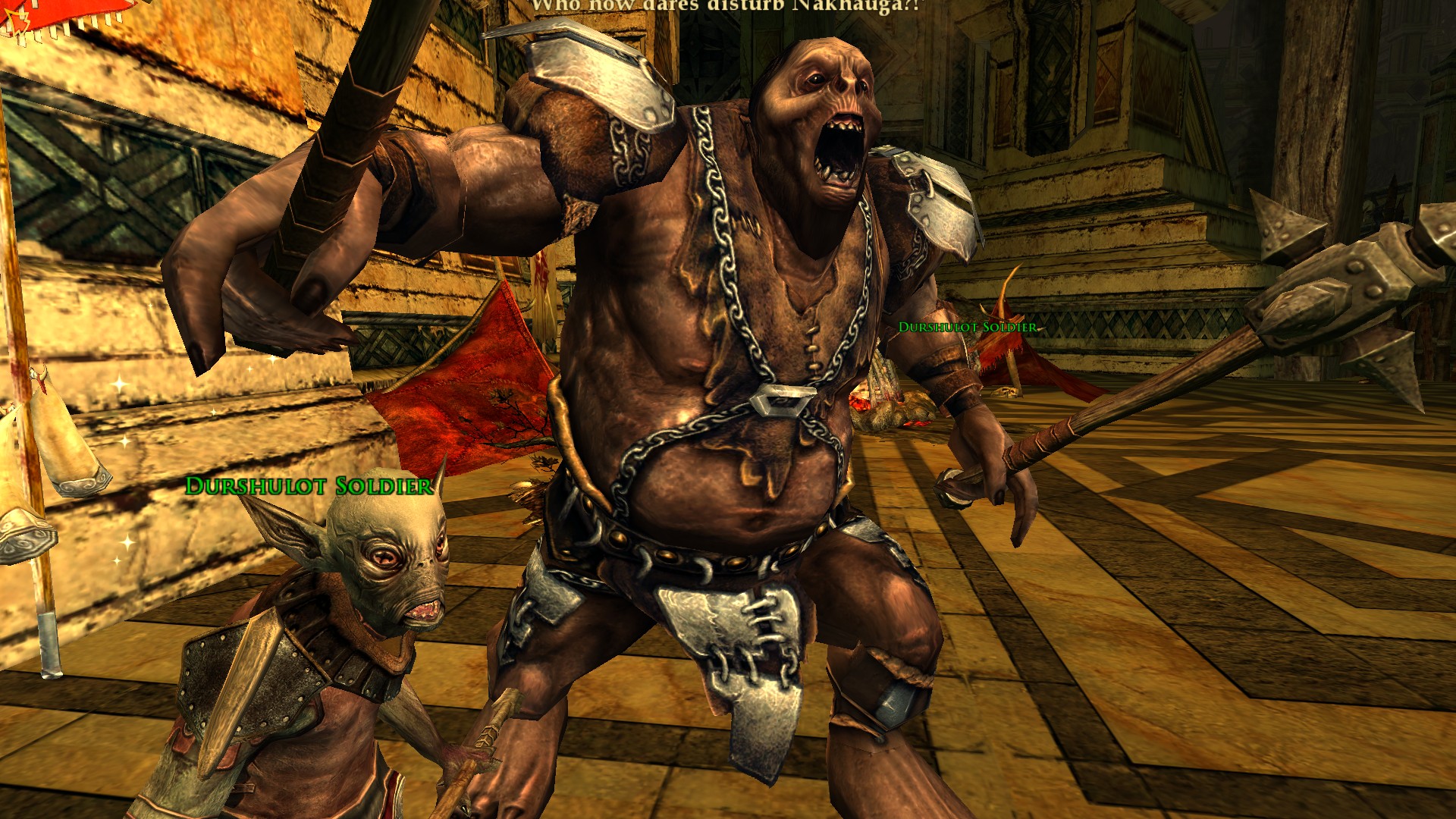 Info: Did you ever notice a bunch of random weapons hanging on the pillars in one of the tombs in the House of Rest on the western side of Stonejaws? This is the quest! In one of the tombs on a central pillar is the "Plaque of Masal" that provides you with a series of sentences. Your job is to solve the riddle by walking over a series of pressure plates one at a time with each corresponding weapon that matches each line in the log. If you make a mistake, don't panic. The whole puzzle will simply reset and you will need to start from the first one again. All the weapons and plates are contained within the same room. No need to go searching for another tomb. If successful, the gem will appear in front of you. Make sure you complete the quest in the tomb before leaving. Leaving the area or not completing the quest right away upon unlocking the jewel will fail the quest and prevent you from receiving the Epilogue for the portrait frame.

Lore: This light-blue jewel symbolizes the good fortune of the dwarves and of all those who seek prosperity in Gundabad. But it reminds us too that chance can be fleeting, and we must appreciate that which we have when we have it. 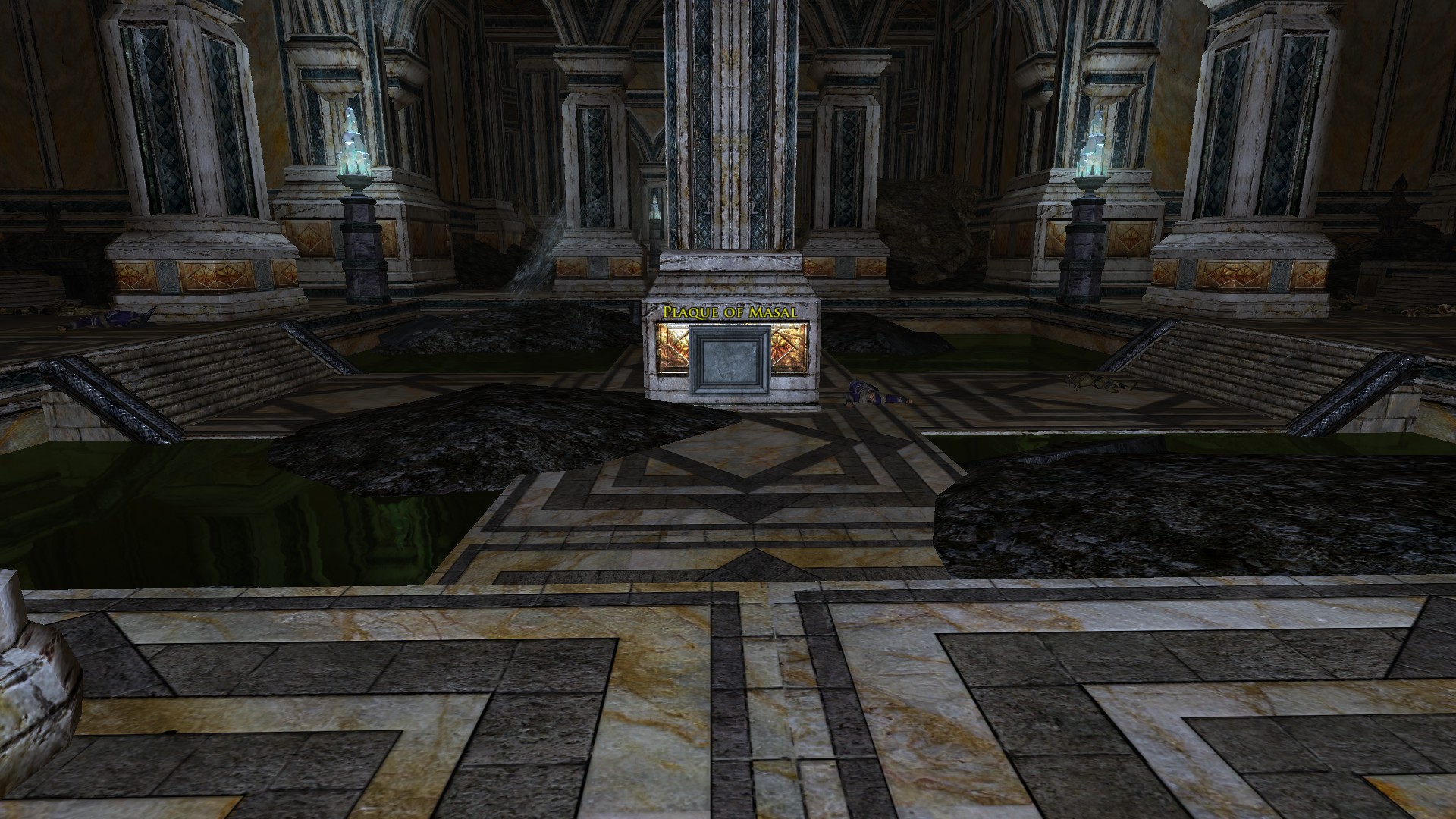 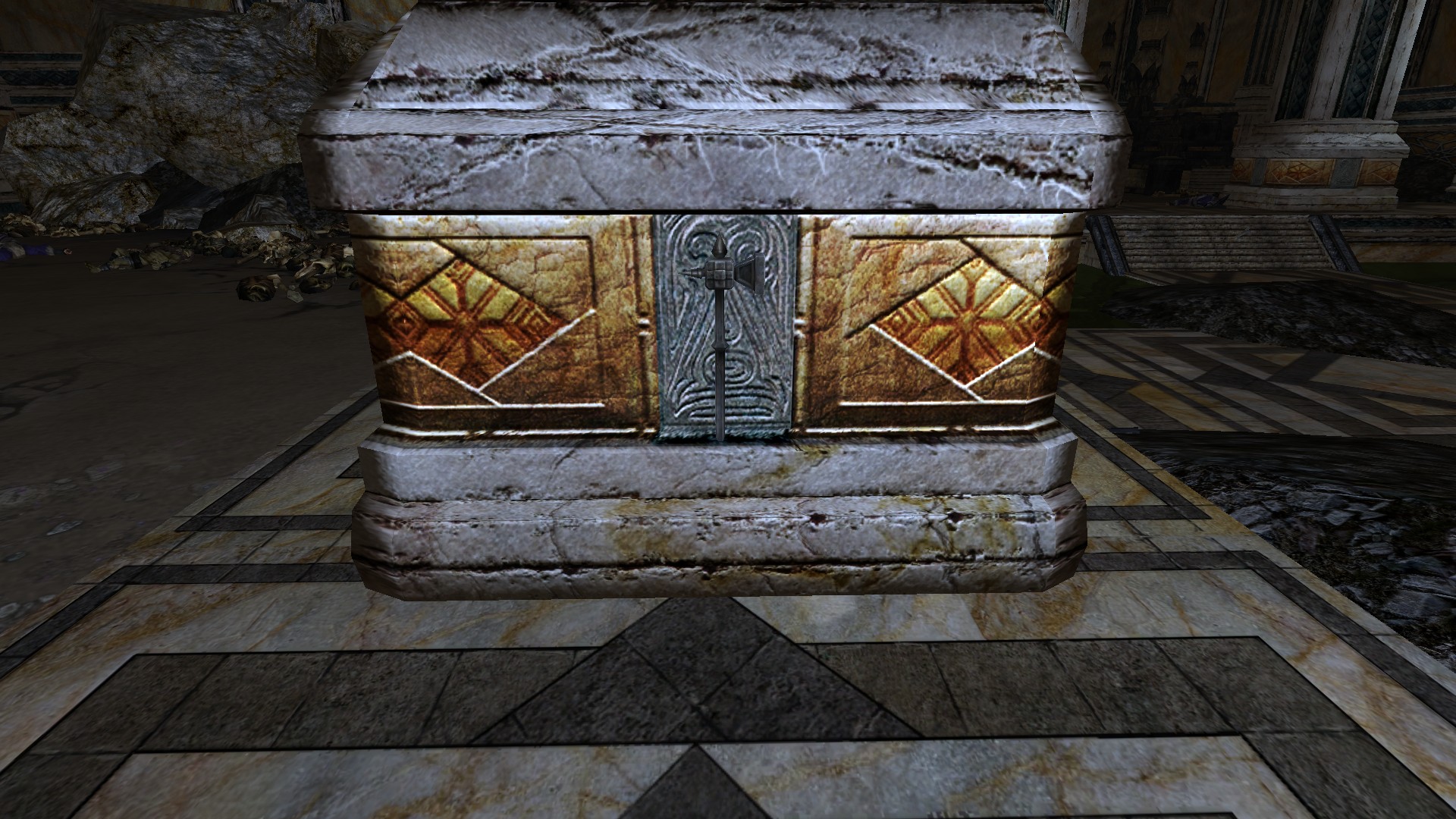 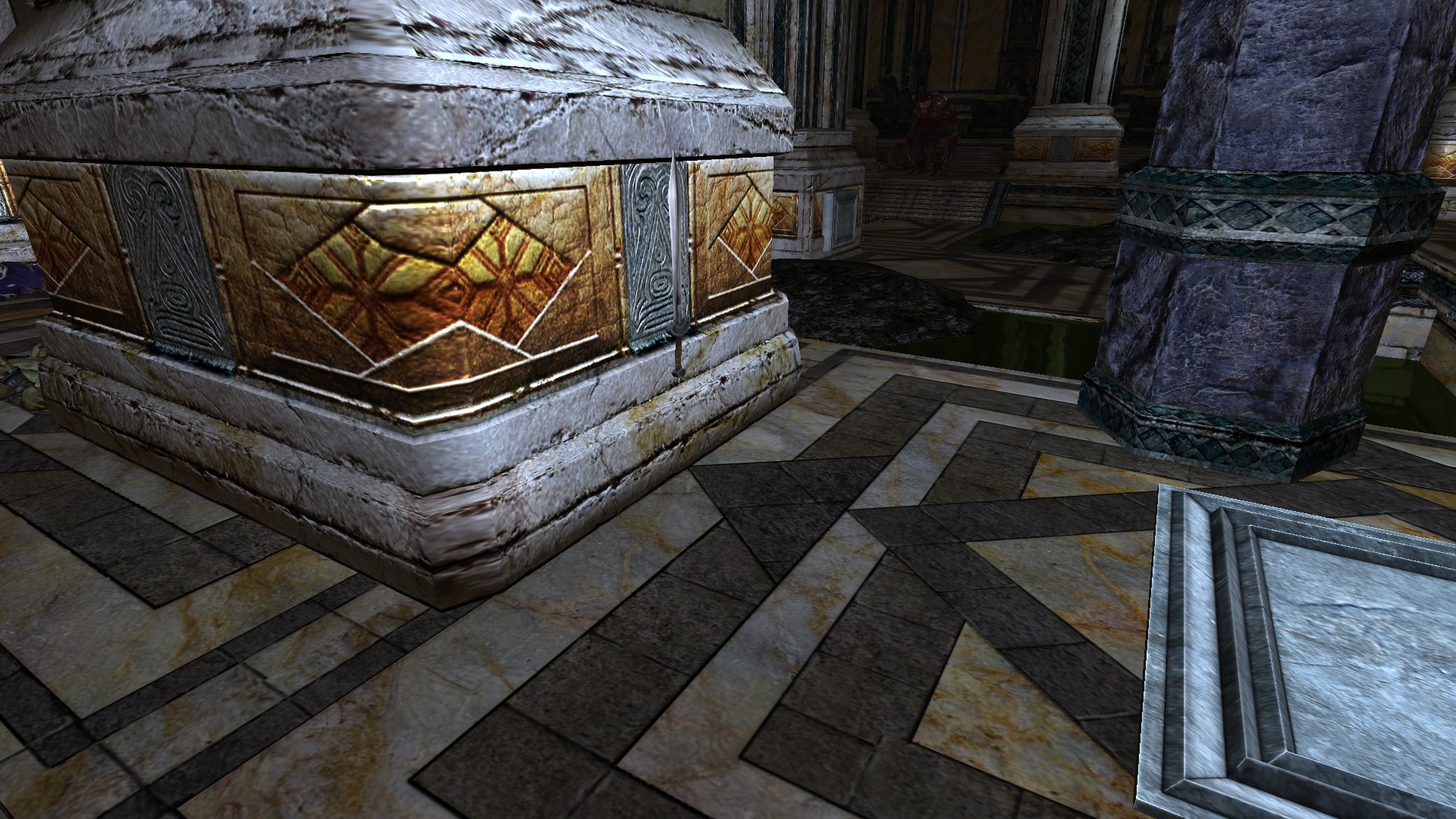 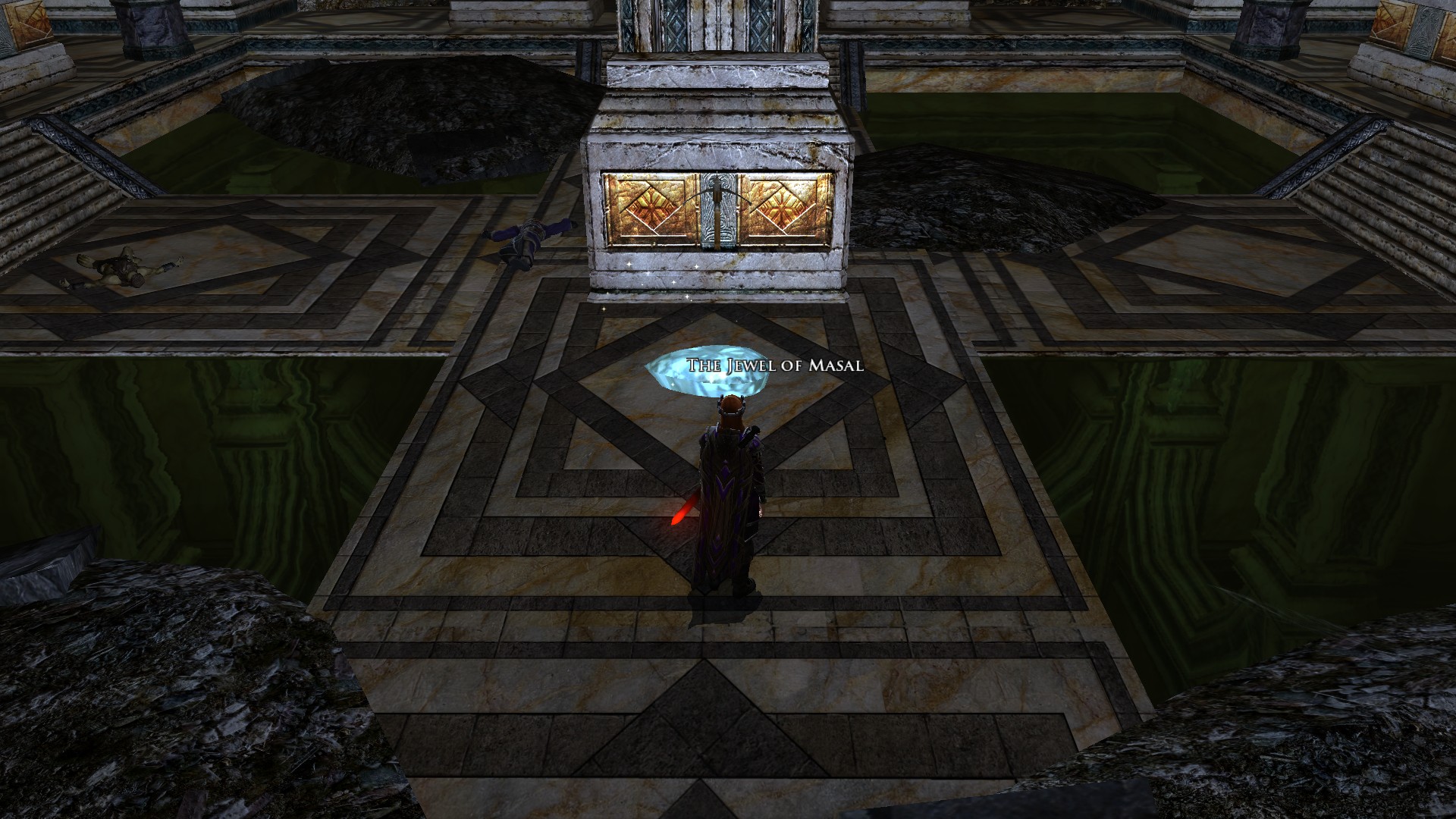 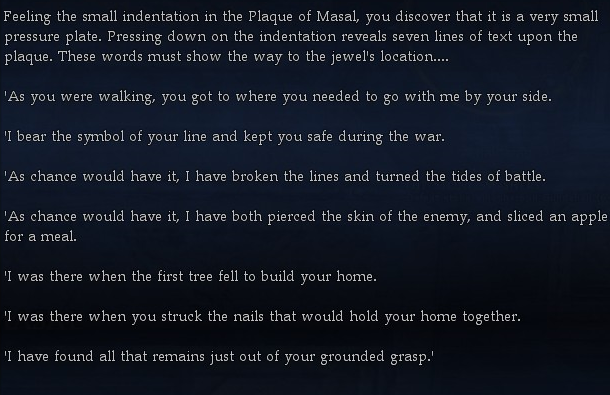 Info: The lovely wasteland that contains so many sites to see is also the same grand place that you will spend several hours exploring. Many of the treasure caches are hidden in the farthest reaches of the zone. But it is the slayer deeds that will preoccupy your time. If you aren't collecting a bunch of random gear while slaying a whopping 360 dourhand dwarves for the advanced deed, you'll be over at the giant encampment making sure they pay for exiling one of their own. Then when you are done there, show how cruel you are by slaying all the rams and crows you can find. Eventually you'll find that this gem was captured by the Angmarim cultists at the Drearspire. Defeat the madman at the top of the stairs to regain it for the dwarves.

Lore: The violet jewel symbolizes compulsion, but I daresay that is not always a negative force. Why, I declare that compulsion can also be a force for good! 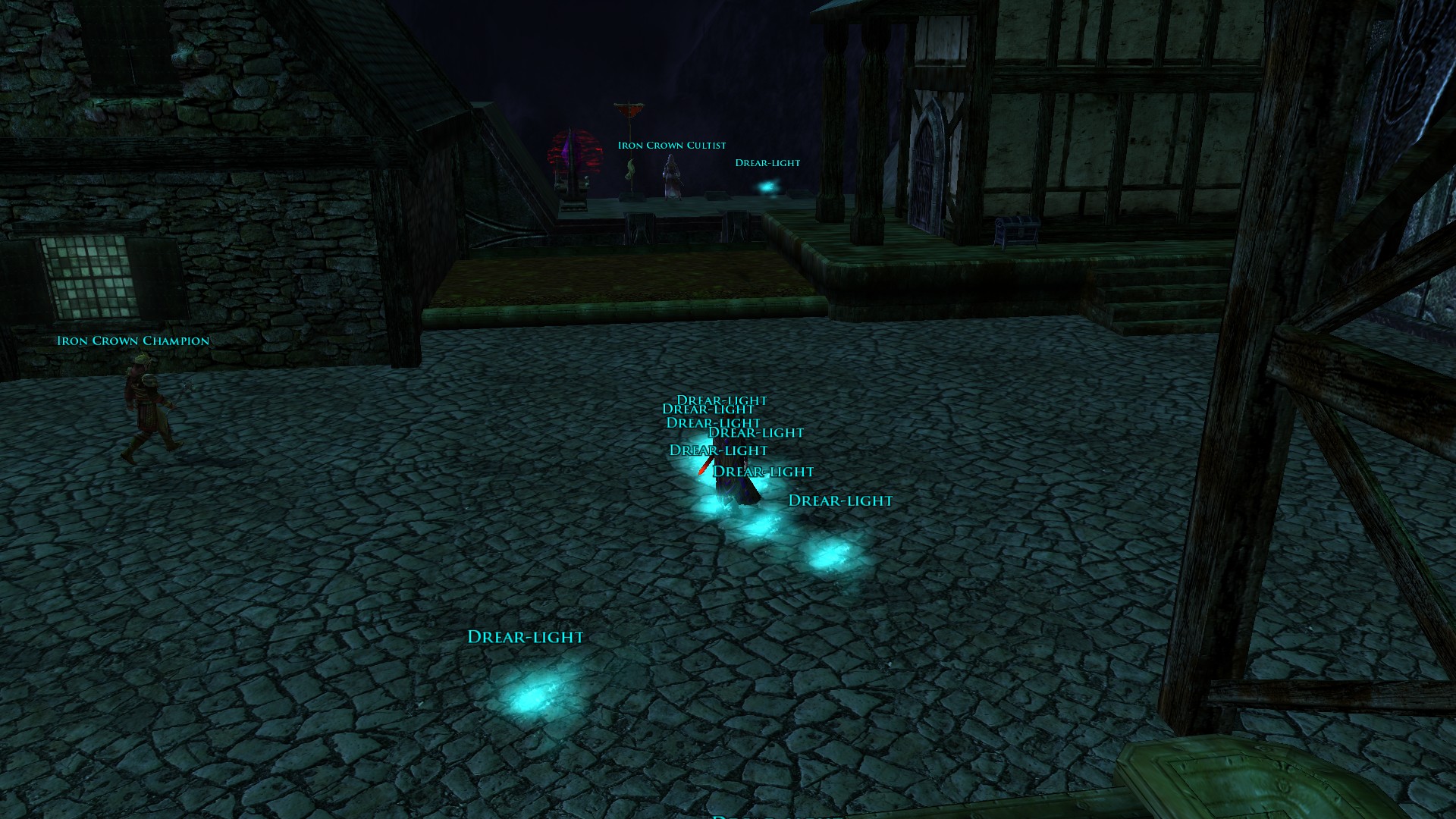 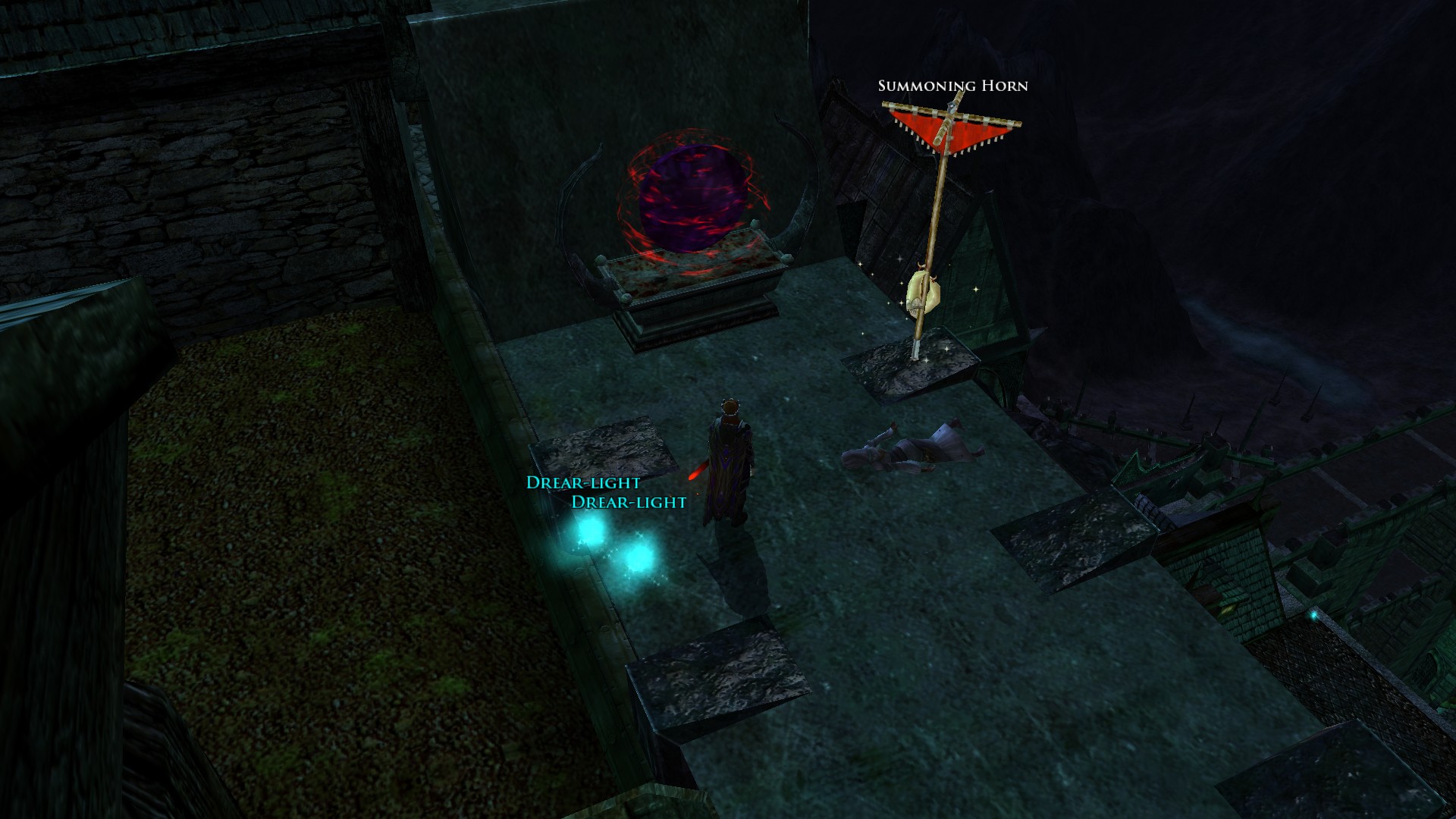 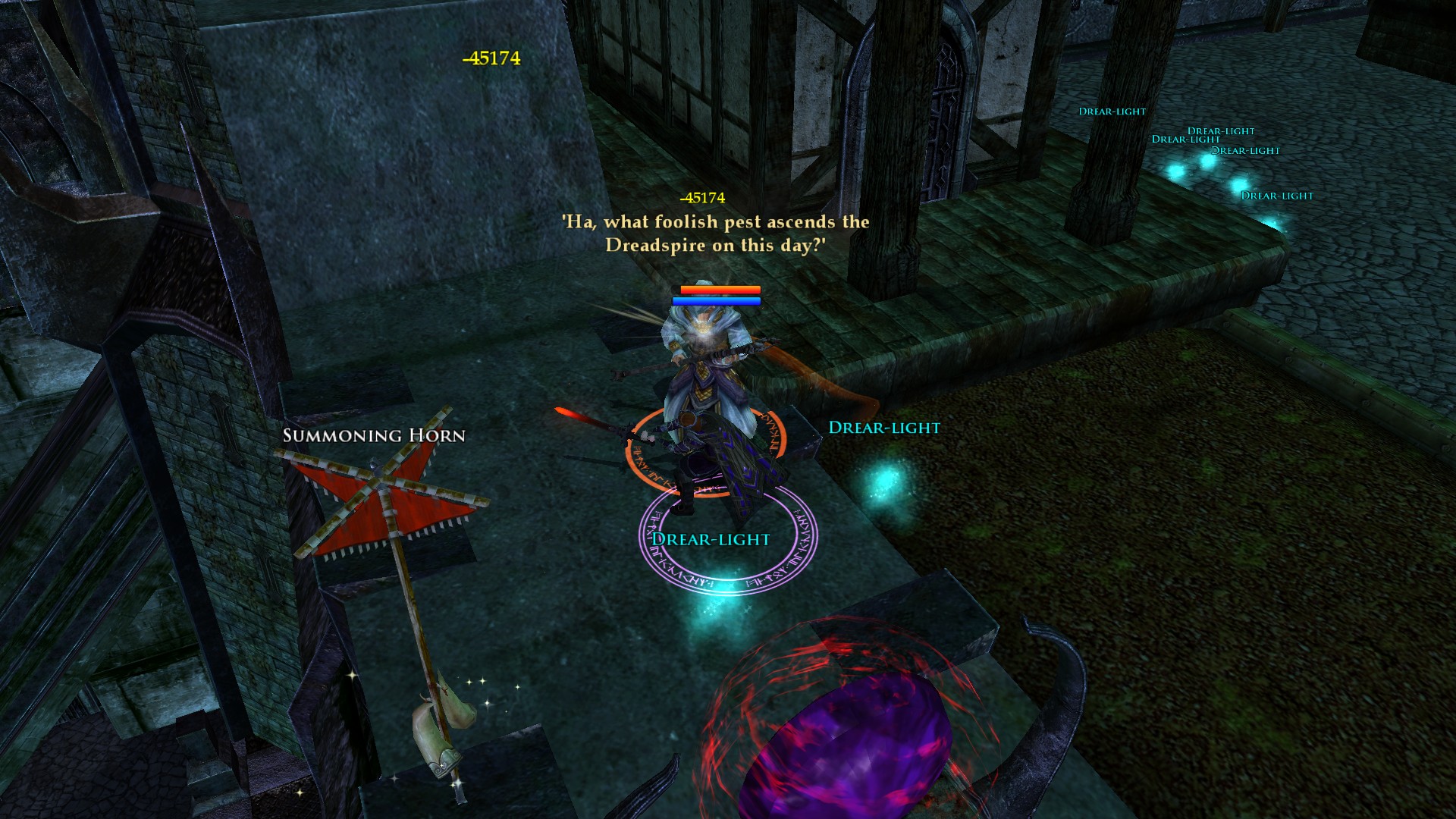 Info: It becomes clear that the dwarves here aren't very keen when it comes to finding the gems. You have Stali the Hewer sending Eskil to look for them. Then Fastrith gets distracted killing orcs when she becomes a substitute apprentice. If only Broin could help guide her a little, you probably wouldn't be shifting through the piles of muck in Durthuzaram, the Dark Lake [44.7S, 122.6W]. Of course, you might also become affected by the dwarves' sense of direction when they ran right past Karazgar in Ered Mithrin. Or it could also be whatever is on those deep toads that let's you visit Shiny, Happy World! where you can taste rectangles and smell the colour magenta. Once you come to your sense, the jewel winds up being right behind you. Pick it up and deliver it to Zidir-nesad. Risti Graver will of course double-check to see if you cleaned off any muck before setting it in the throne.

Lore: This green jewel represents nature, not just the natural environment in which wild things grow but also the natural state of all beings. It is the nature of the dwarves to persevere until all is made safe from our enemies. 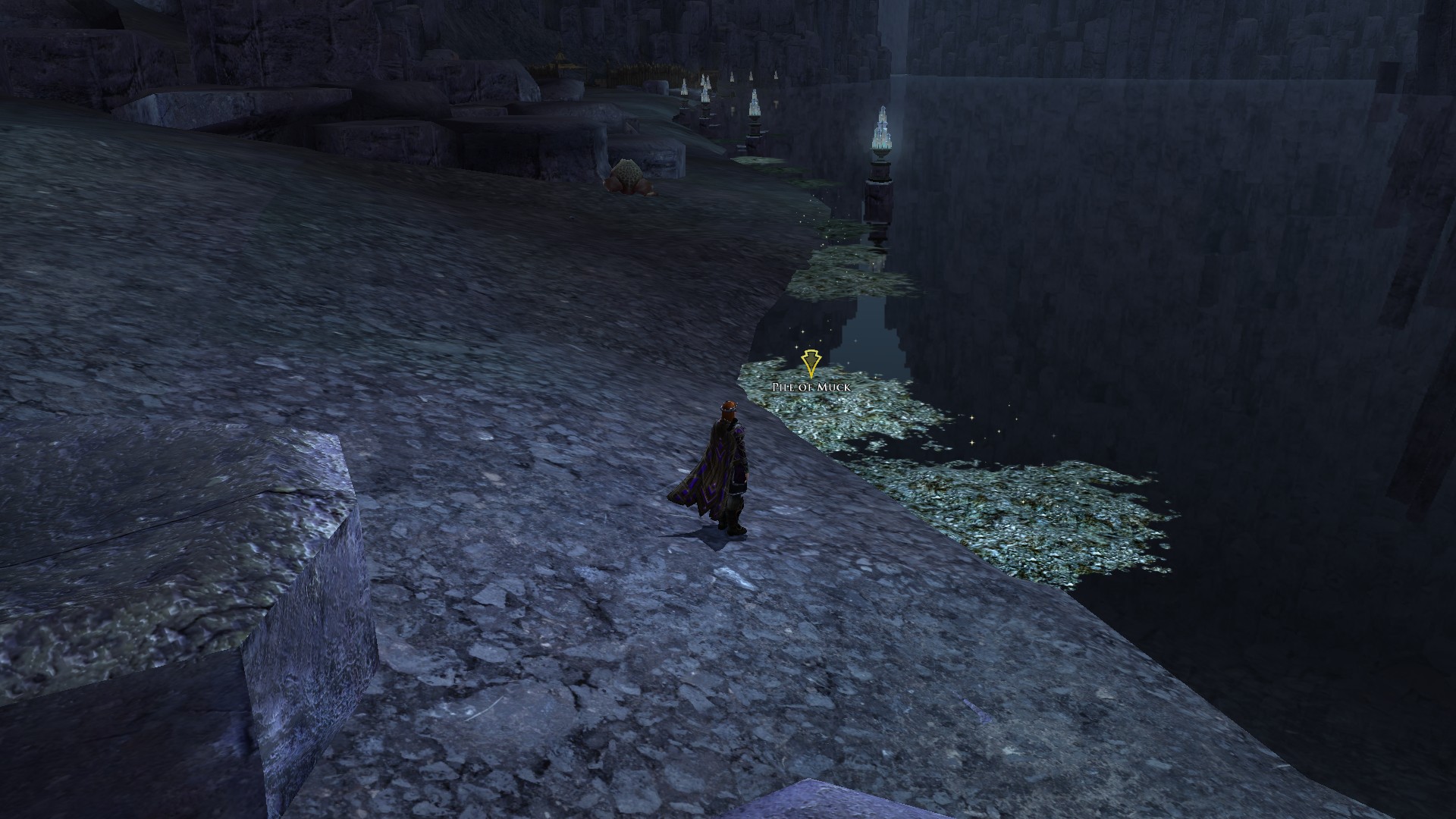 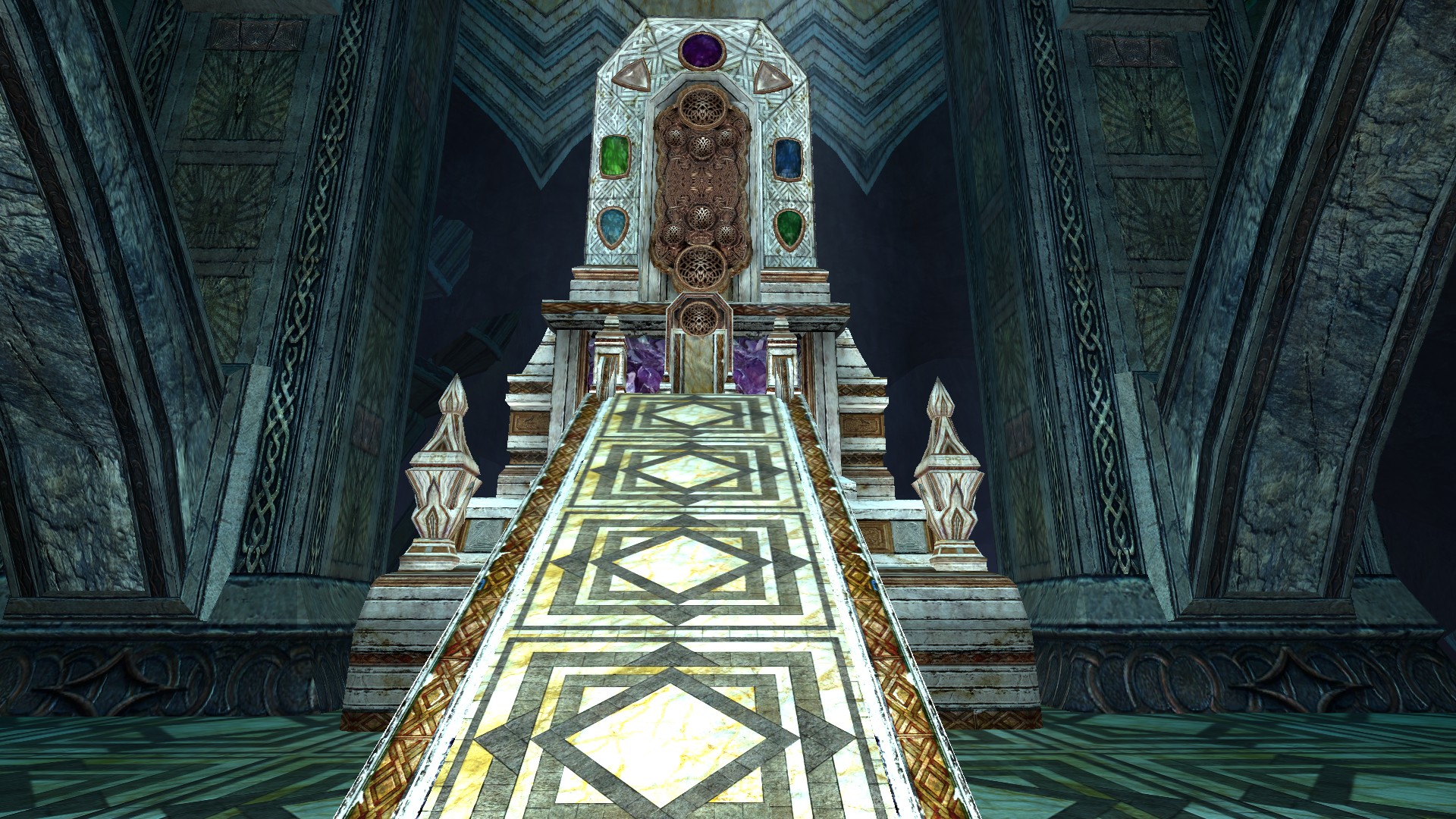 Info: I hope you aren't completely tired of this ravageous zone yet. You will come by another dwarf who knows where it is but unable to retrieve it. It seems that someone who is in possession of the jewel has been caught and tied up by the Angmarims at their main camp in the western district. If you are having trouble finding this guy, you aren't alone. Vilur Strayfoot is not located in the forest or by the river. He will magically appear the moment you venture inside the large tent on the northern side of the Angmarim Camp located up a few ramps. Unfortunately, rescuing the captive isn't the only thing you need to do to retrieve the gem. The sneaky dwarf doesn't exactly have it on his person, but he conveniently draws you a crude map with just enough information to find where he hid it. And where else would you find it except behind a waterfall?

Lore: The red jewel symbolizes passion, and for the dwarves I know it is a passion of the earth, and of stone, and of the deep places in which treasure can be found. So too is it the passion that drives us to do our very best in all things, and strive against deadly threats that, once overcome, will delight the listener with tales of the triumpth against them! 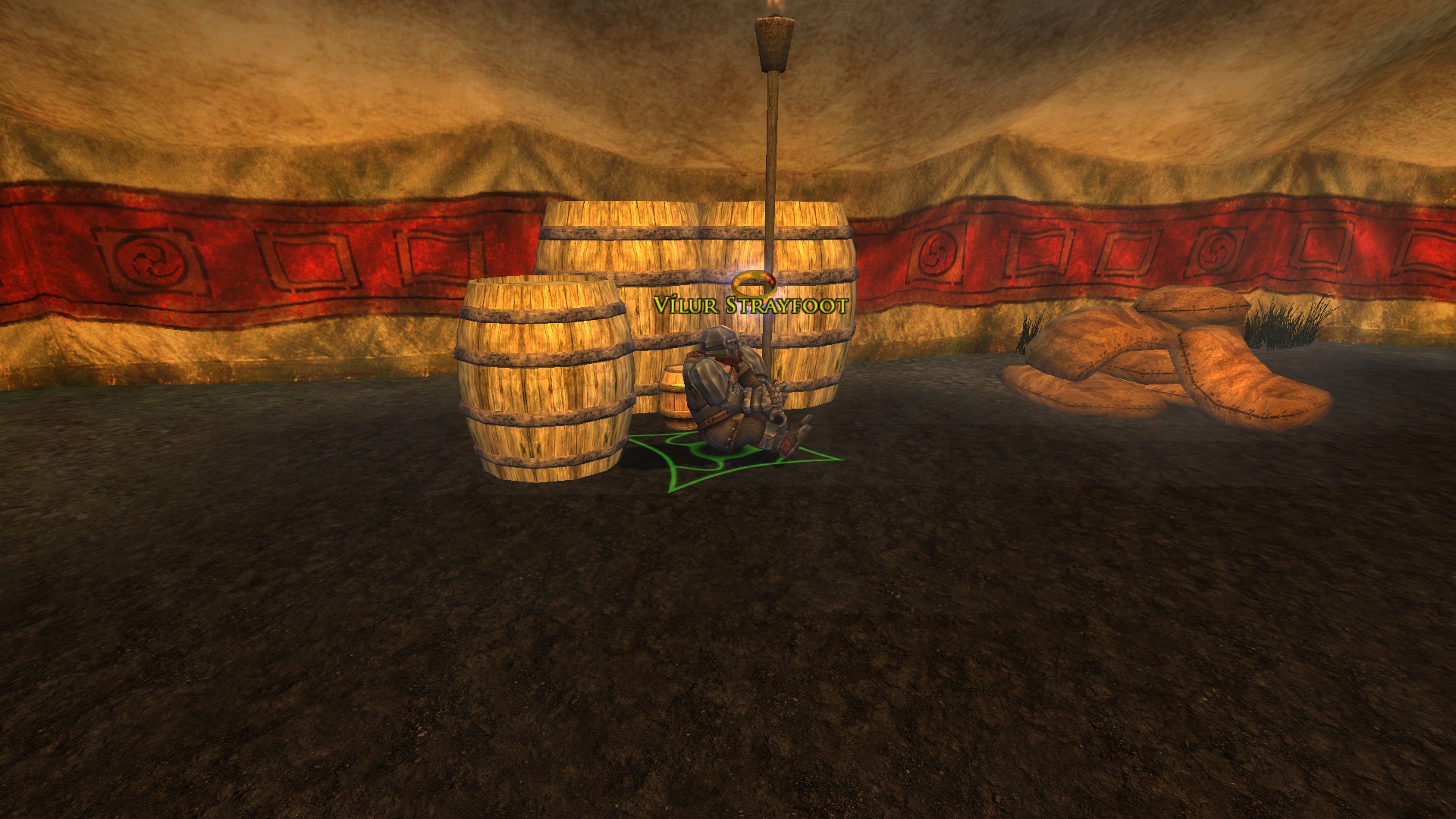 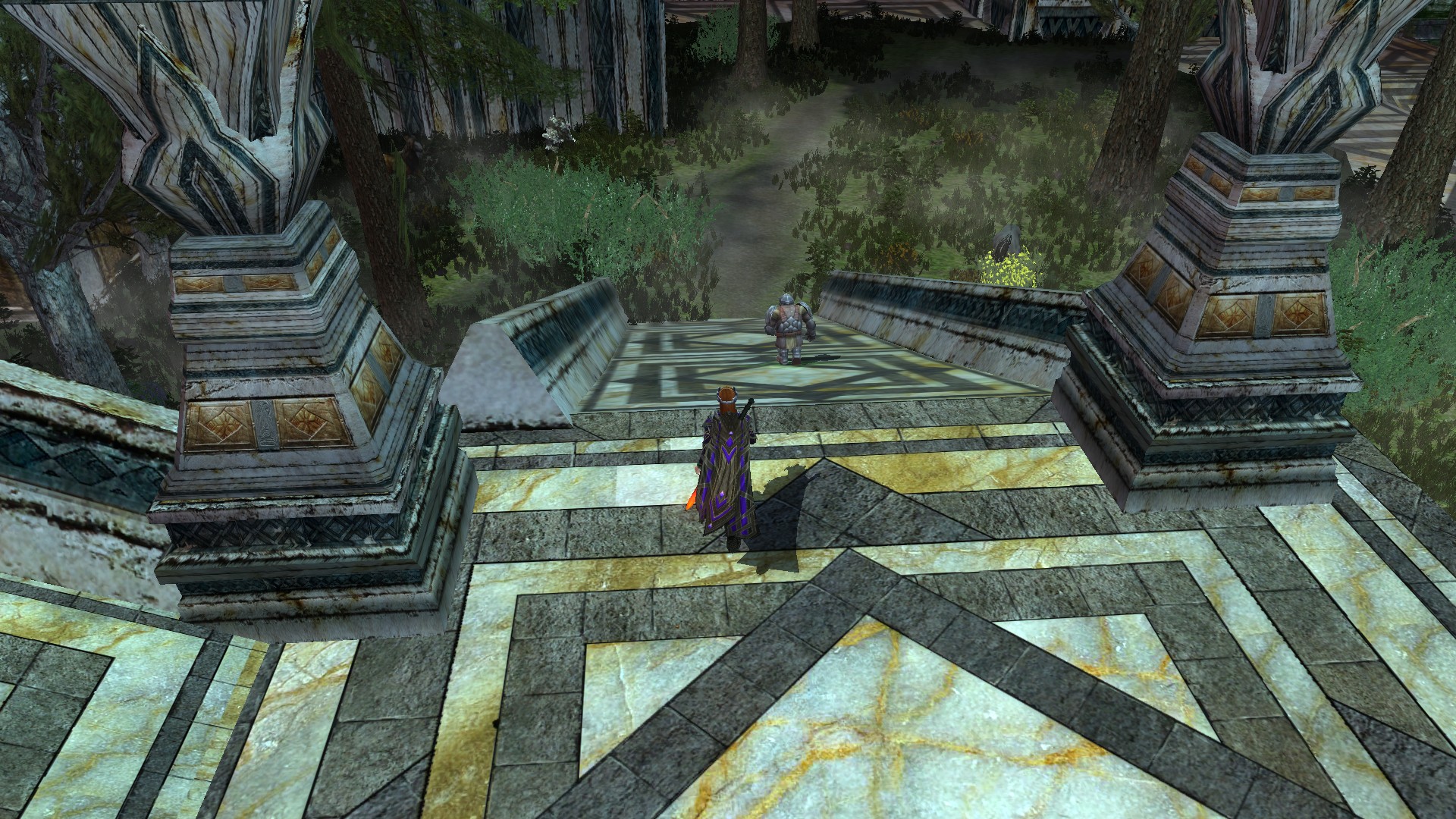 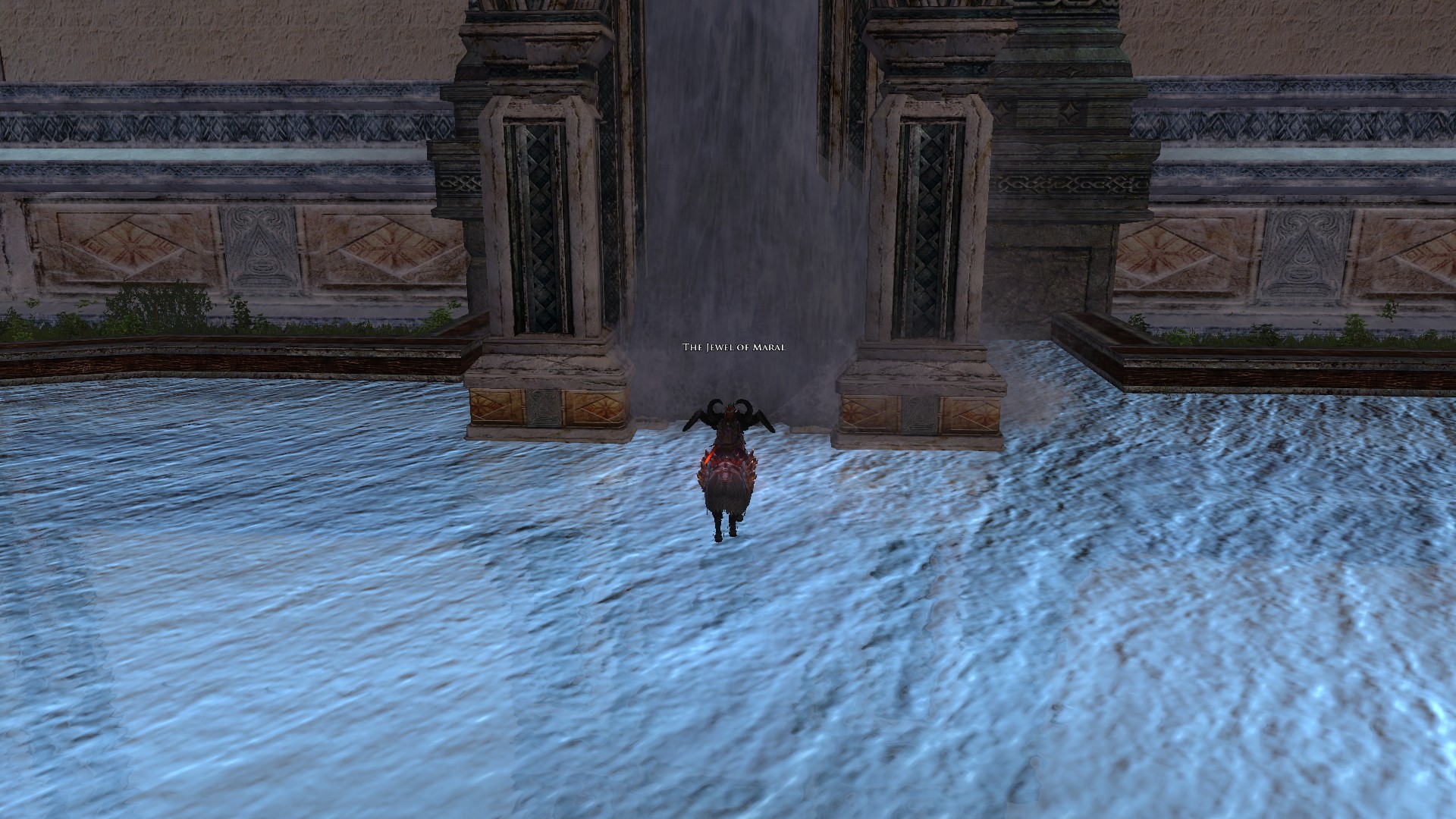 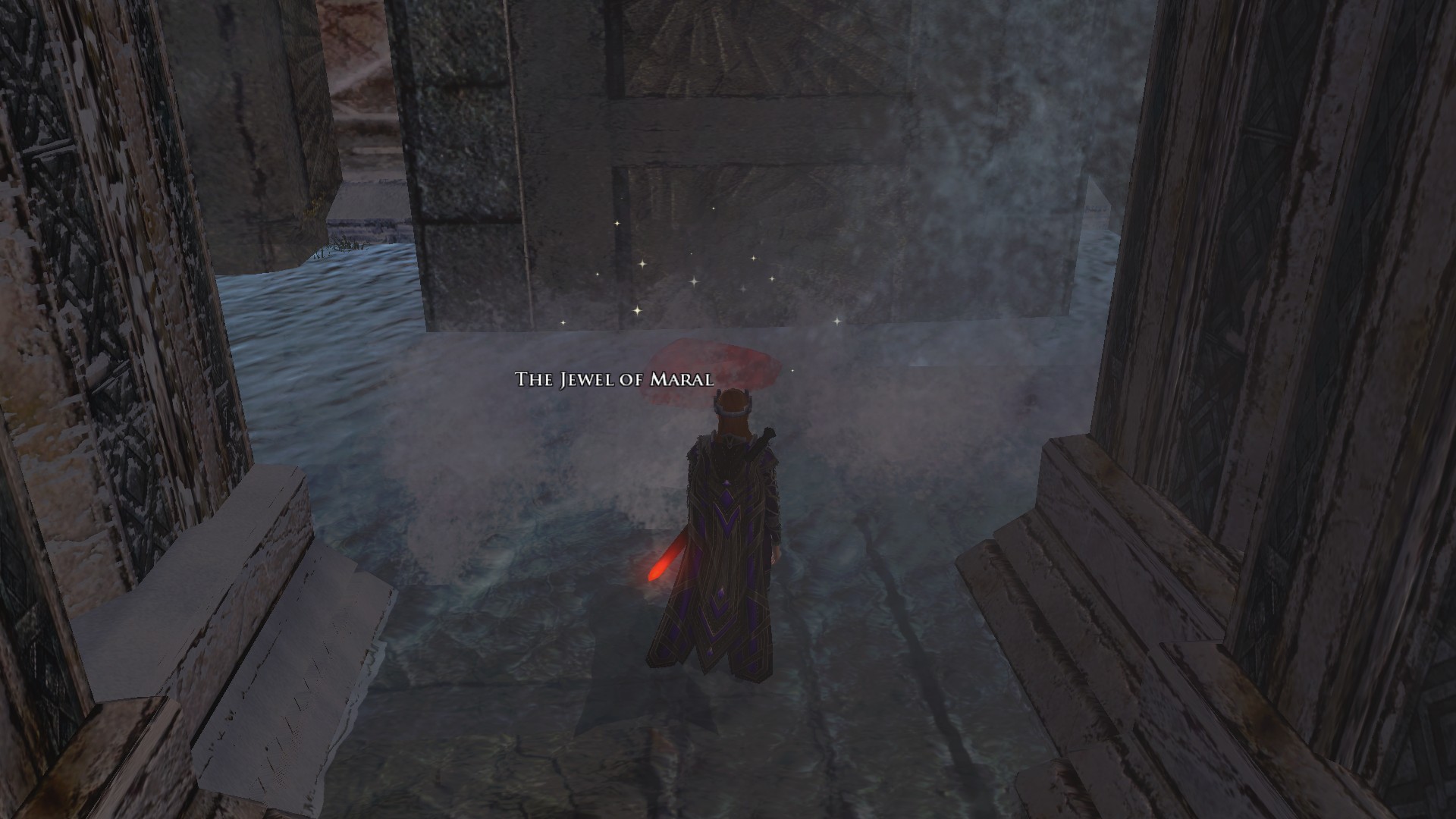 Info: It is true that the last gem was found in the frozen lands outside the breaches of Clovengap. It is just too bad that it had to be in the possession of an infamous squad of dourhand dwarves. I have this sinking feeling that these are the exact ones we rescued out of the hobgoblin camp north of Steepset, went back in to retrieve their trade goods, and kicked out of the Halls of Vernozal by Prince Ingor in Chapter 8 of the Allegiance System. Unfortunately or not, Mangur Bentpenny is in the mood to haggle. First, he asks you to slay that one silver drake hanging over the side of the cliff and retrieve his horn. Surprised after you return alive, he assumes that the jewel is even more valuable and increases the price! He then asks you to bring him the hidden treasures of the Iron Crown - those ones you've probably seen laying all over the camp but had no clue how to get. Once meeting up with him a second time, he agrees to trade the jewel for all the little trinkets you obtained.

Lore: The orange light that shines from this gem symbolizes reason, and if there is one quality that best describes the dwarves, it is that one! When something is of great importance to our people, I assure you there is much consideration that goes on, just beneath the surface. 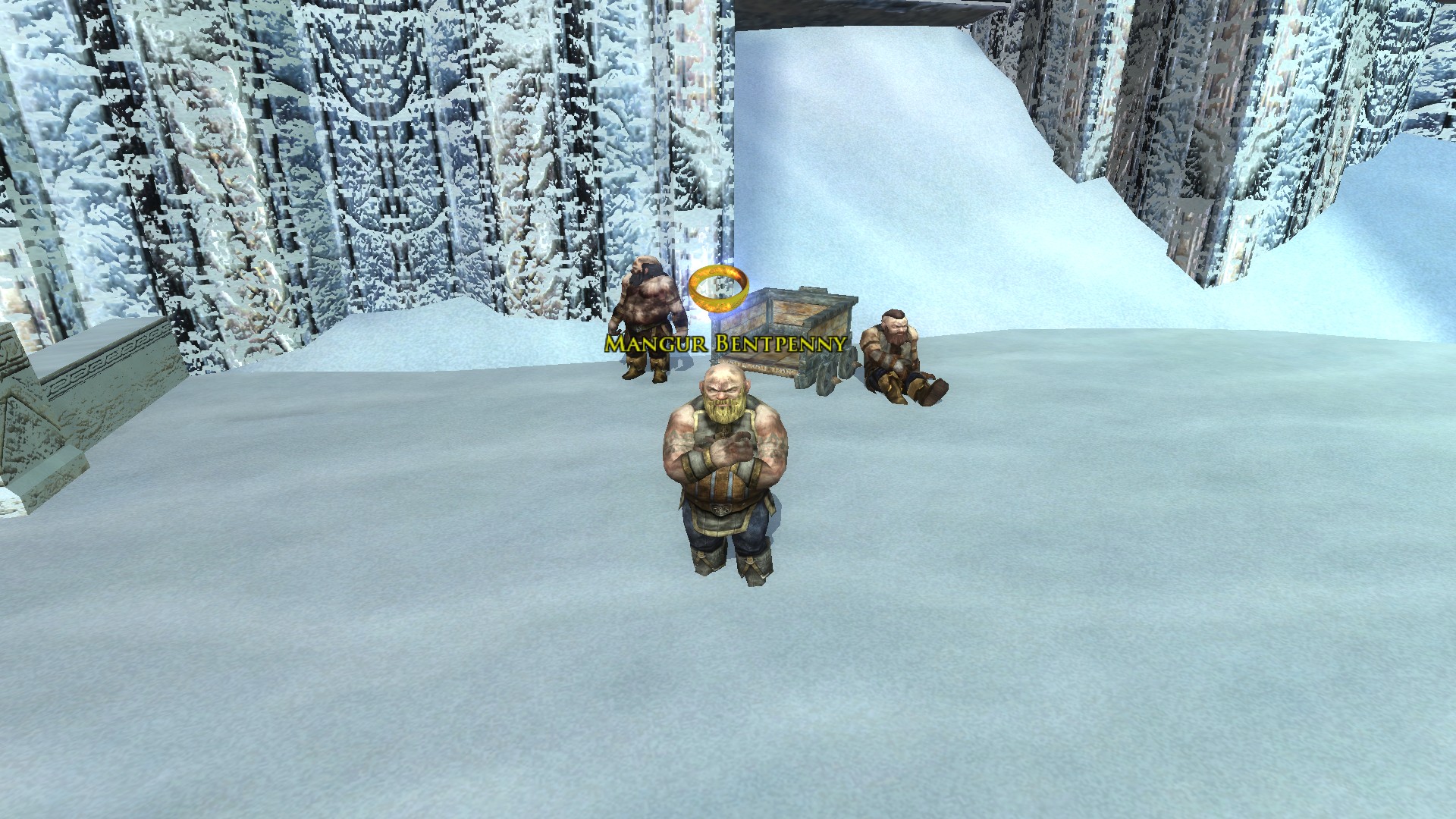 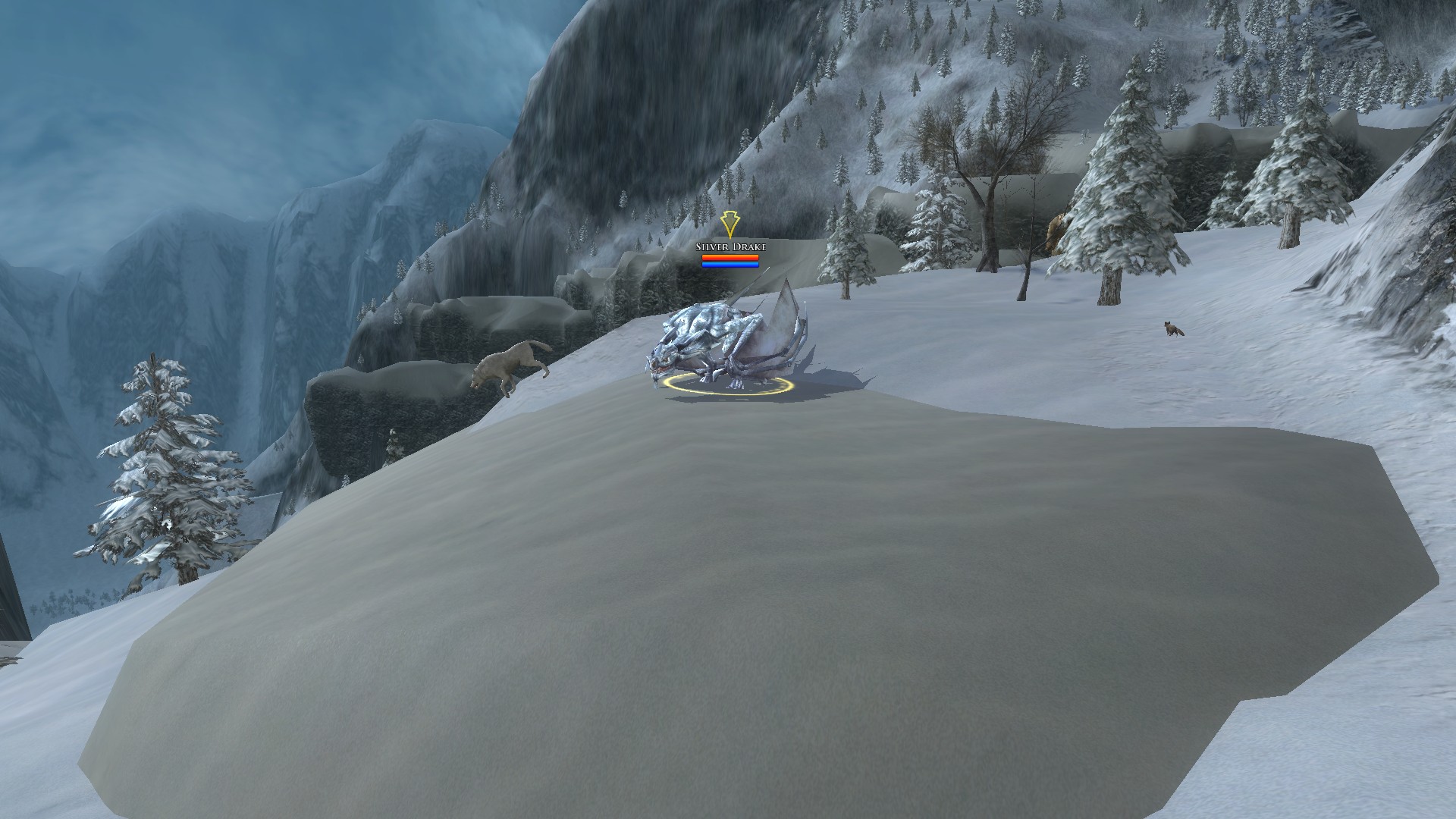 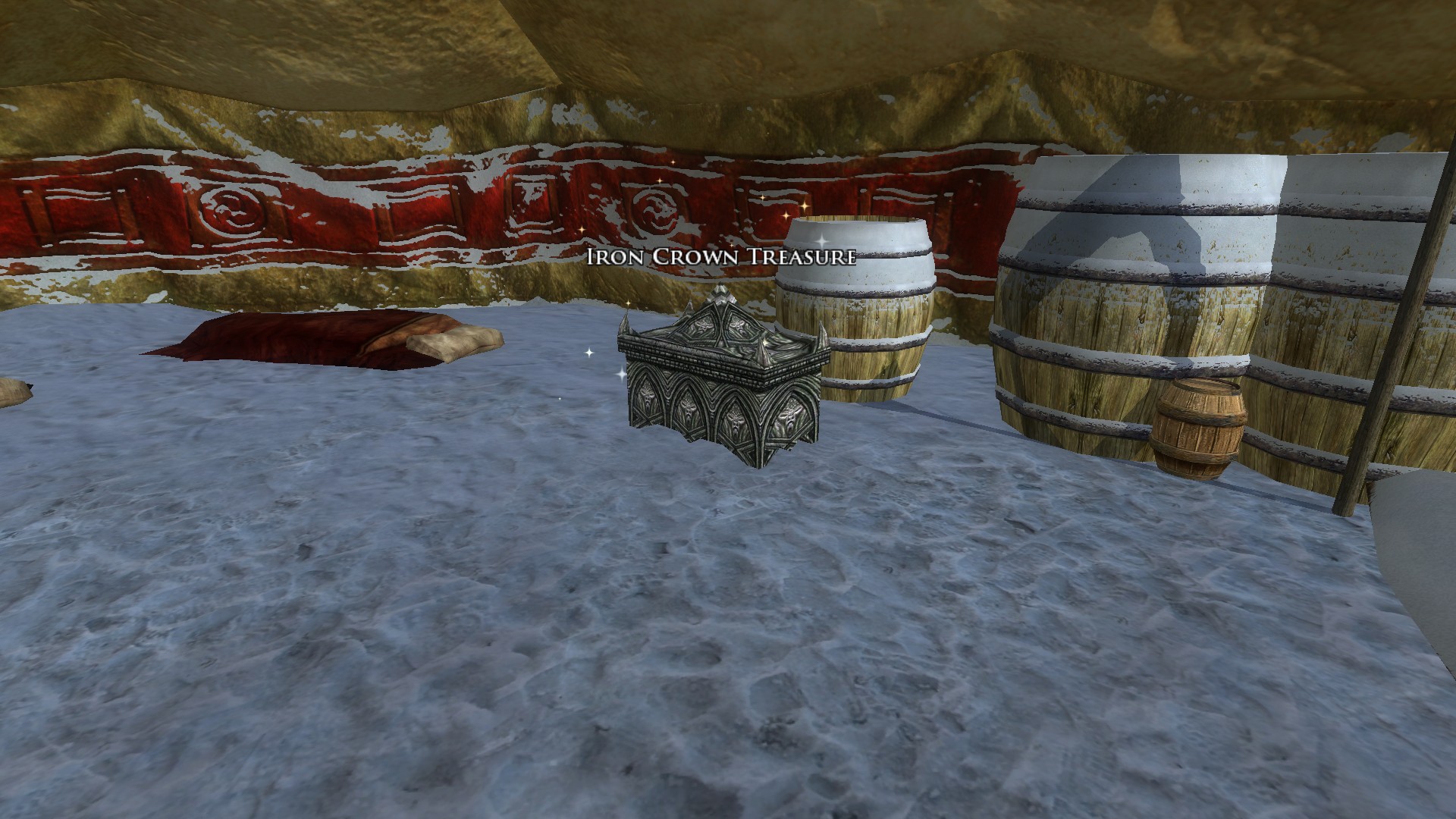 Epilogue
Once you slot all the gems onto the throne, Risti Graver will ask you to bring Prince Ingor to the throne. He will sit down to "test it out" and admire its craftmanship. 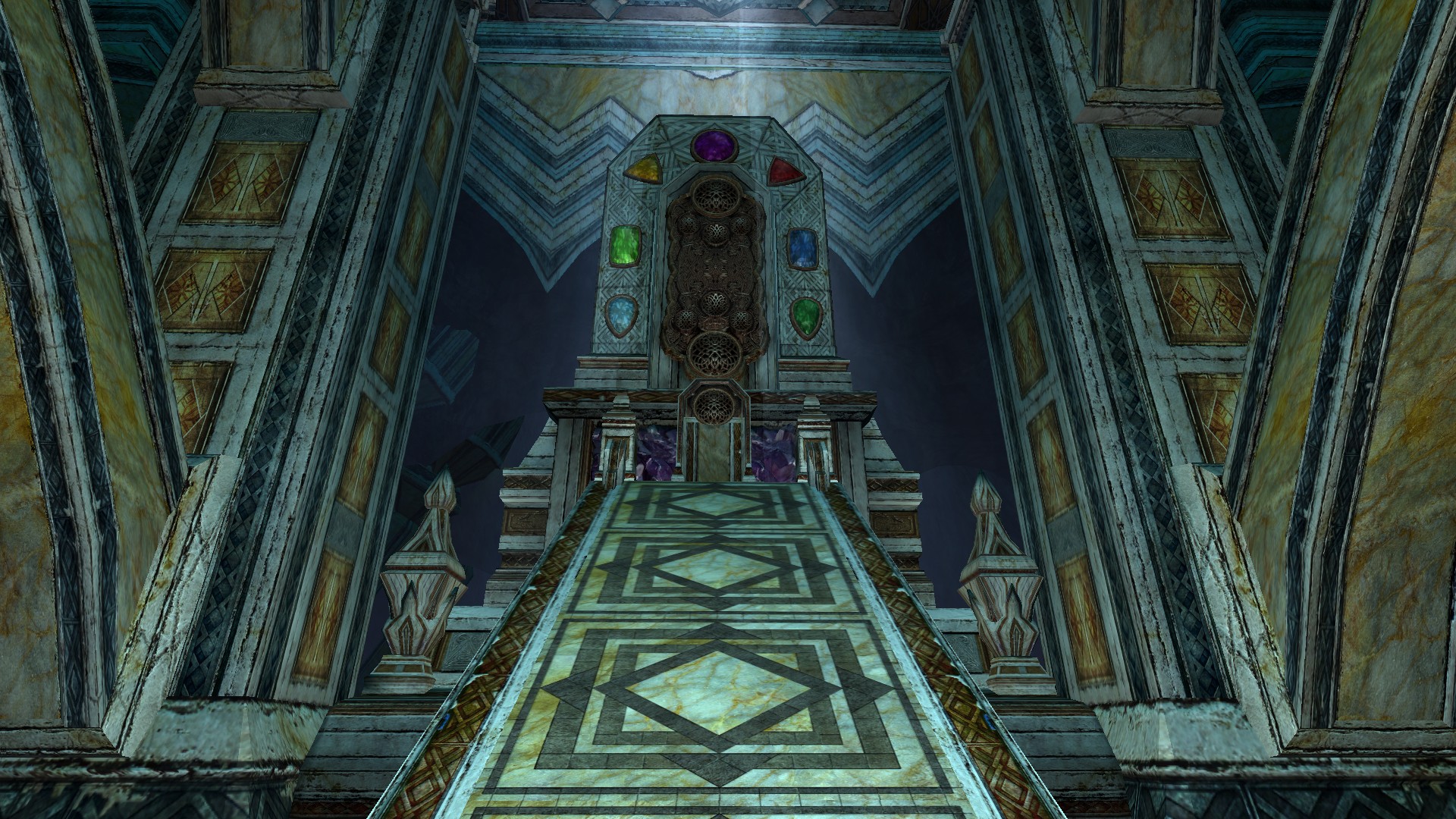 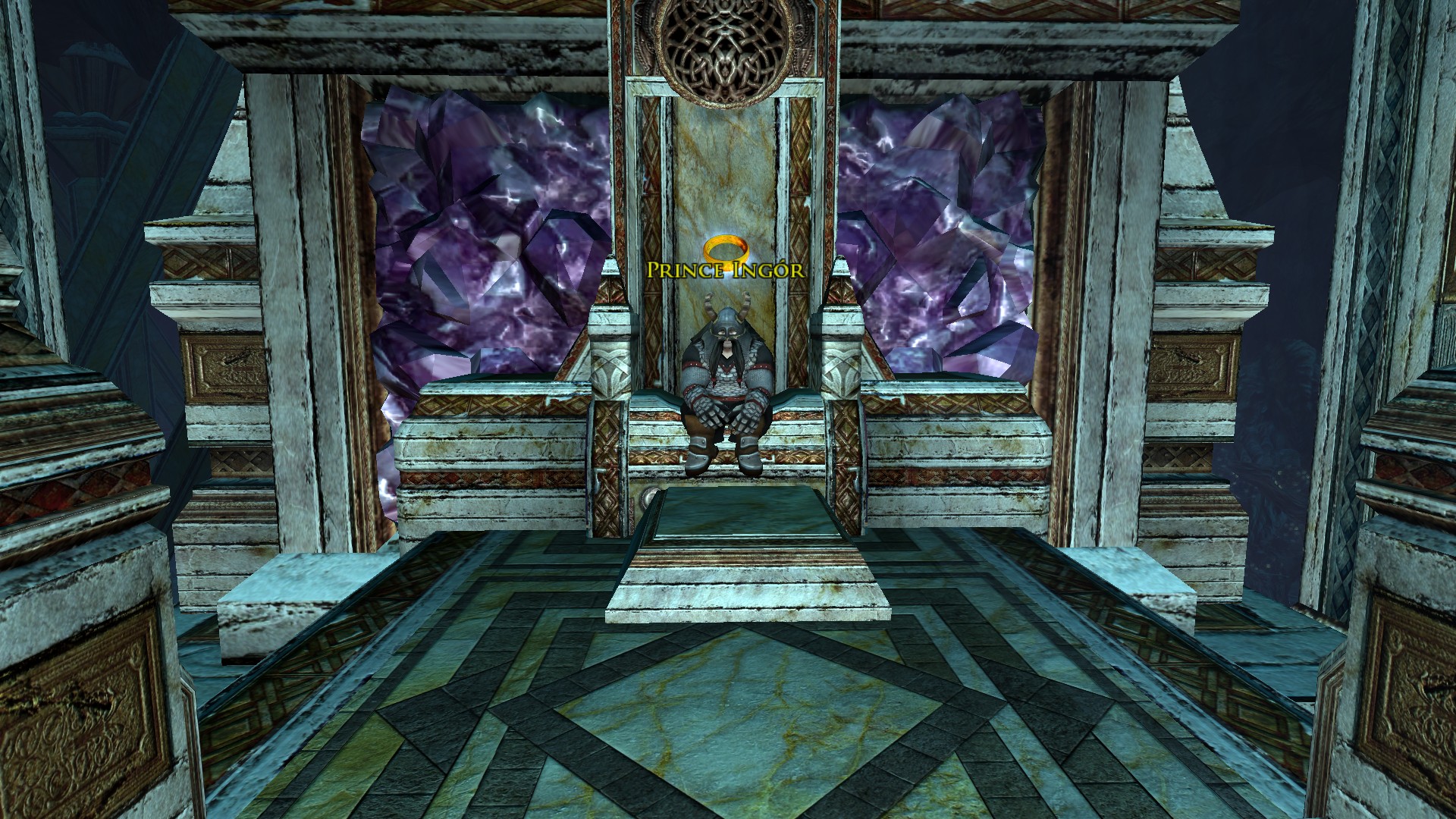 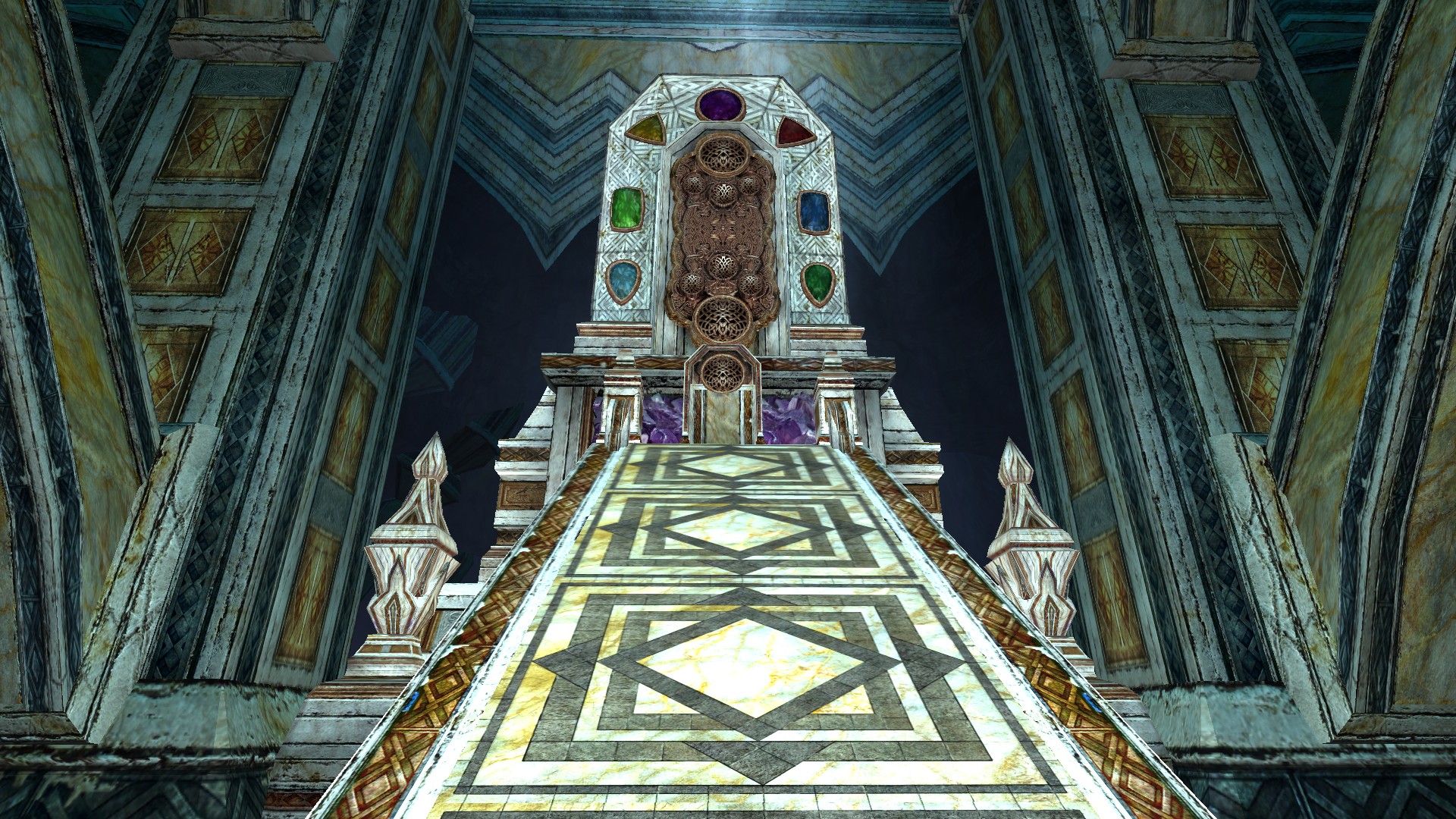